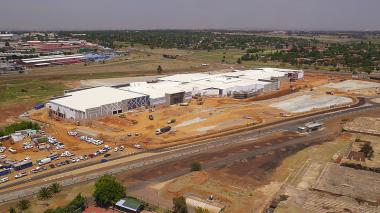 Springs Mall located in the suburb of Casseldale, will open for trade on Thursday, 16 March 2017.

Despite oversupply perceptions, a new R950 million shopping centre, Springs Mall, under construction on a site at Blue Crane Eco Park, will open for trade on Thursday, 16 March 2017.

Despite a slowdown in consumer spending across South Africa in recent months, at least 30 new shopping centres, varying in size from 5000m² right up to 120000m², are expected to open their doors this year and next.

According to the Developer, when the 48,000sqm Springs Mall opens, it will become the only major mall in Springs, Ekurhuleni, in the east of Gauteng.

“For many years, the vision of the Springs-based D’Arrigo family to develop a major mall for Springs seemed an impossibility. In less than six months, it will become a reality,” says Paul Gerard of Flanagan & Gerard Property Development & Investment.

In anticipation of its opening, retailers have clamoured for trading area and the iconic mall is already almost full, with some 96% of retail space let.

These retailing giants are supported by other retail brands, concepts, and leisure options – both big names and one-off treasures – with plenty to please everyone.

The new Mall benefits from access off the N17 highway and Wit and Jan Smuts Roads. In addition, as part of the mall’s development, its owners have also invested in major improvements to the roads around the mall, which will benefit all road users.

Also Read: Retail proving to be the most dynamic sector in Africa

Gerard reports that, in addition to this new infrastructure, with the opening of Springs Mall, people will not only have a top-notch new venue in which to fulfil their shopping needs, but also a vibrant place to meet, unwind and be entertained.